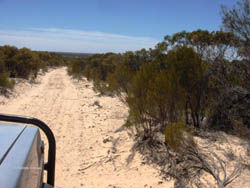 I used Broadies Track as way to get to the south east end of the Milmed Rock Track, about 40km further away. A lovely three hour trek through different landscapes - plenty of sand, some sections of hard clay, lots of wilderness.But also some views of what looks like fairly marginal cropping paddocks, ancient farm implements left to rust under the gums, and old homesteads in the distance.

To get to Broadies Track I started at the town of Jeparit - birth place of former Prime Minister Sir Robert Menzies. I drove North form the centre of town and turned left into the Nhill - Jeparit Road, still within the town area. About 6km from the town centre it is worth stopping to have a look at a sad but interesting piece of climate change history. The Four Mile Beach sailing, skiing and swimming facilities must have been a popular spot on weekends about ten years ago! But now, look across the great Lake Hindmarsh - Victoria\'s largest freshwater lake. If you see any water then you must be visiting at a very special time! All of the facilities in very good condition, and the signs still direct the yachts, swimmers and speed boats as if they were painted yesterday!

Now head West along Lorquon Road for about 7 or 8km, where you turn right into the Rainbow Nhill Road. About 14km along this road, heading North, turn left into the Netting Fence Road. Measure off about 8km from the Rainbow Nhill Road T junction, and watch out for an opening to get into the Hermans Hill Lookout car park and information shelter. I found this not well sign posted on the Netting Fence Road, but happened to guess correctly the first time. There is a small amount of fairly new infrastructure just off the road, but not easily visible from the main road.

If I remember correctly there is a sign directing you to Broadies Track here, but Google Earth shows that you will actually be driving along the sandy J Hensleys Road. About 5km, maybe a little more, after leaving the Lookout carpark area you will turn left off the J Hensleys Road onto Broadies Track. I don\'t think I saw any signage at this point. As you drive from the Hermans Hill Lookout to here you will be skirting along the eastern end of the Big Desert State Forest, and will have glimpses of farming land to your right. When the landscape opens up to reveal an open area, and the road veers hard left, you will find the junction that signals the start of Broadies Track. Veer left at this junction and head North North West into the wilderness!

About 1km into Broadies you will see a tempting side track heading up a reasonably steep hill. The offer of a great view. I was tempted. A great sandy climb, and a great view from the top. The tricky bit is getting down again! You can either go down the other side of the hill, a little to the left actually, and scratch your paintwork with the overgrown scrub, or try to execute a tight three, or five point turn in the soft sand! I thought getting bogged at the top of a sandhill was not the go and headed off down the \'scratchy\' track instead.

As you head North from the lookout hill you get the feeling of being swallowed up by the bush and the sand hills stretching off into the distance. But the track actually opens up a little and becomes firmer - dry hard clay ( depending on the weather of course !) I was a little worried as to where \'we\' were headed, as the track gradually meandered between North West to North East, and I must admit I was starting to feel just a bit geographically challenged! About 6 or 7km from the start Broadies Track meets Firebreak Track at a T junction. I turned left. The track now skirts around the western paddocks of a cereal farm.

I travelled along this track for another 10 to 12km before \'popping\' out onto a more significant road, that was the Pella track. It was quite sandy. I tuned right onto this track and soon came upon a sign-posted junction that pin-pointed my exact position on my map. Who needs one of those GPS things! Hmmm?

I followed the signpost a further 9km down the Pella Track to find the turn-off into the Milmed Rock Track. The Pella Track keeps winding ahead, North East, towards the Western Beach camping area on Lake Albacutya. I had left Jeparit about four hours earlier, and had just spent the last three hours covering only thirty kilometres. My first lesson in the slow progress to be had across what appears a simple little section of the map!

But now, as I headed off with enthusiasm down the Milmed Rock Track I was about to be given the same lesson all over again. Four hours to cover the next 70km! But a lot of fun never-the-less. I wonder how the Simpson compares to these Big Desert tracks?