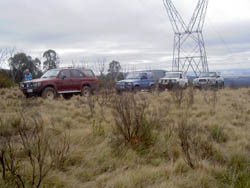 Brindabella, Bendora Dam & some powerlines
About the Track
Track Description

The 4x4 Earth Canberra Chapter (twisty, dave, jackson and chappie) did a meet and get aquainted trip.

We met at Conder Hut and went for a look past Bulls Head and down to Bendora Dam. All simple and 2wd only.  We wanted something a bit more challenging and dave wanted to do a bit more reliability testing. Unfortunately all the gates were closed on tracks they may have led to more exciting terain. So, back the way we came looking for powerline tracks.  Past Picaddily Circus and halfway to the tar jackson and dave spot a track they knew.

Alright :-) We all stopped and started to air down. Except chappie. He wanted to give it a try at highway pressure. 10 minutes later we were ready. Jackson and dave bounced up a step onto the track while chappie and I took the easy entrance. I was last. A ranger stopped and asked me where we were going. I pointed up the track. I think he said \"you can\'t get through\" but I didn\'t get a chance to clarify before he drove off :-( The other were already on their way and nearly out of sight. Select 4x4 low and go. I let everyone know what I think the ranger said, but, we were somewhat committed and could turn around if I had heard the ranger correctly.

Half way up I notice brake lights and chappie on the radio complaining about his clutch. Jackson and dave could smell it. Seems chappie had neglected to select 4x4 low. oops. 15 minutes later chappies clutch had cooled down while we all had a chin wag. Another 15 minutes later we discovered what the ranger had been talking about. A short, tight (for my patrol) descent with a couple of diff cracking rocks to negotiate on the exit. I didn\'t see the others complete and was glad of the guidance down. This 30 metres would make the track a medium grade IMO.

With a bit more time left in the day jackson led us to a climd he\'d been defeated by recently. He and dave both made it easily while chappie and I took pictures.

Great day. Stay off the powerline tracks and you can do it in nannas car.

More pics and vid to come