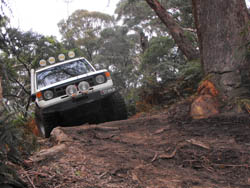 Straight up is the first obstacle. A very steep rocky and rutted descent. These rocks aren't just your everyday garden rocks, they are quite large. If you didnt pick the right line you'd be caught up on them no worries at all. Was some fairy tricky area's with rock ledges with some offering chicken tracks which are almost as tricky as what you are chickening out on.

The bottom of that section you come across a very large fallen tree but there was a very simple way around it. The track on both the GPS units and the paper map had the track going up to the right, I dont think a comp truck with 44&amp;quot; tyres would actually be able to make it up the actual track, massive wash out about 4 foot deep and about 4 or 5 trees a little further up which would require a very large chainsaw to get through.Now this chicken track you had to make a very sharp left hand u-turn followed by a 90 degree right hander up a soft, sandy, muddy slipper hill, with 2 tree root ledges to negotiate once you reach the top. This hill wasnt to steep but enough to cause drama's but on your side is that it was is only about 30m to the top. Sounds very straight forward but on the left hand side of this section was about a 2 foot deep by 2 foot deep rut the entire length. If you lost traction coming from the u-turn section you rear would simply fall into the rut.

You then proceeded onwards to find another steep rocky, rutty decent. Numerous trees across the track but we were able to move them to continue until we got to a section which was just not looking to appealing. Which was about 300 - 500m from the end of the track. We ran into a guy on a dirt bike and he informed us the track further down was slightly worse but to get out of the track the track leading out (Mansfield Track) was basically impassable. All the rigs could have managed to get down the section we stopped at but no guarantee that we all could get back up so the decision was made to turn around.

So going the other way now is almost twice as hard. Would love to actually finsh this track.


note from Bomb3rman 3/4/2012 - Track in relatively good condition. Hardest track in Cobaw by far. Done in the dry. Lockers do help!