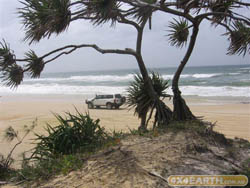 The run along the beach from Eurong to Cathedral Beach has a lot to offer, allow yourself a full day, to do it justice. Fuel & groceries are available from Eurong, Happy Valley and Cathedral Beach. Look out for planes landing on the beach near Eurong. There are numerous sandblows along this section that you can walk into. Most people use the by-pass track around Poyungan Rocks, although I did see a tour bus run the gauntlet around the rocks with sea water lapping up to the wheels. There is another by-pass at Yidney Rocks which is just before Happy Valley.

Eli Creek is an iconic destination on Fraser Island and we stopped here for lunch on the return drive. Large amounts of crystal clear fresh water flow out to sea, making it possible to float down stream. There is a boardwalk upstream.

3 klm along the beach is the shipwreck of the Maheno, The Maheno was a 5282 ton triple screw turbine steamer luxury liner, accommodating 254 first class and 201 second class passengers. Built in Dumbarton, Scotland in 1905 it had a top speed of 19 knots and broke all previous records on the run between Melbourne and Sydney in 1905. During World War I the Maheno was converted to a hospital ship by the New Zealand Government in 1919. The Maheno was taken out of service in 1935 and sold for scrap metal to the Japanese firm, Taminosuke Myachi of Kobe. The Maheno left Melbourne on 25 June 1935 in tow behind the Oonah, a 1700 ton coaster which had also been sold to the same buyer. During a fierce cyclone the tow rope broke and the Maheno drifted ashore . All attempts to refloat her failed and was eventually abandoned. At the beginning of World War II the ship was used as target practise by the Bundaberg aviation training school. Square holes remain in the middle section of the hull, resulting from World War II demolition practice by the Z force commandos, using limpet mines.

Cathedral Beach was our next stop and we had a look around while having a cool drink. Diesel was $243.00 a litre, Ouch! We returned to Happy Valley and headed inland towards Lake Garawongera, this track is rough in sections and passes through lush Rainforest.

Lake Garawongera is not the popular tourist attraction that Lake McKenzie is, although it is still worth a look. The water is the colour of weak tea due to the tannin from nearby trees leaching into the water.
Track Logs