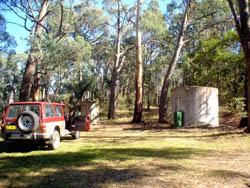 This is an easy Track which runs off of the Elliott Way between Tumbarumba and Cabramurra. My starting point was from Paddy\'s River Cmping area which has a good River running through it (Paddy\'s River). The water is suitable for drinking and there is flush toilets. There is also good fish to be caught in the river.

Leaving Paddy\'s River Campsite, turn right and go to the next turnoff, Elliot Way (on Left 150 mtrs) and head towards Cabramurra for about 21km.

The Track File starts at Boundry Road which is a dirt road running off of Elliott Way to the Right. There is a few gates that you will come across so please LAF. Its fairly easy going in the dry but very slippery in the wet as I\'ve found. There is a fair bit of overgrowth on some parts of the track so it would be advisable to carry a chainsaw.

There are many tracks going off in all directions so it is advisable to download the track file or carry a good map.

I came across a lot of Brumbies on this track and at least one of them was a sight to remember as he was a magnificent looking animal.

The track comes back out on Elliott Way where you turn Right and head back to Paddy\'s River or try another of my tracks to Backway to Talbingo  found here.