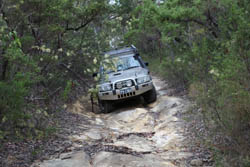 We did this run on the same day as the Wheelbarrow ridge track and while it shows us starting from the Wiseman’s Ferry, the actual ferry not the town, and returning it could also be a diversion on the run to Bucketty and the Watagan Ranges.

From St Albans to Circuit Flat Bridge is around the 36 kilometres using the Northernmost track, less using the southern one, so doing this after a lunch at the Settlers Arms Inn at St Albans will not stress you time wise. The bridge itself, or what remains of it, was constructed by convict gangs as a part of the Great North Road, with this particular section renamed to the Old Great North Road, which was to link Sydney and the Hunter Valley. While it was completed around 1836 it saw little use as it bypassed existing settlements, had no permanent water courses and lost out to coastal steamers which were quicker and certainly more comfortable. While at the bridge, whose decking has long since disappeared, spare a thought for those that had to build this. Imagine what it would be like on rations in the middle of summer cutting and hauling the large sandstone blocks used in its construction.

As to the roads, the first thing to note here is for those in ‘soft roaders’ don’t let the images scare you. A look at the map above will show two different paths in from the Wollombi Rd Road with the southernmost having fairly easy access with little in the way of washouts or sudden drops to contend with. On the other hand the northernmost track will include some deep holes, narrow clearances to bush. If there have been recent rains then expect water and some rancid mud. I really must remember to stop overselling these places.

As always if you have any questions please feel free to contact us http://vk2us.id.au/index.php?option=com_contact&amp;amp;view=contact&amp;amp;id=2&amp;amp;Itemid=27