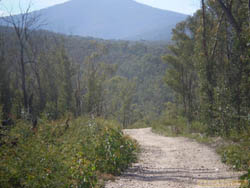 The first part of the track has rocks and steep ascents and descents.

There are 12 river crossings along this track which range in depth from ankle deep to waist deep.   We did the track after some rain, so water might be shallower in the dry.   During Winter, the river crossings may be impassible as the river beds in some places indicate a depth of several metres.

Where the track runs along and crosses the river, it is relatively flat with a sandy and in places rocky surface to drive on.   Several parts of the track run along the river bed and you are driving on rounded / smooth river rocks.

Track may be rated as difficult in wet weather due to the steepness of some of the track during the first couple of kilometres.   This would make it slippery.